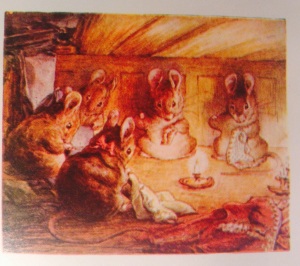 This past week, somewhere in the open-ended cycles of holiday time, we unearthed an old copy of The Tailor of Gloucester at my partner’s childhood home. There’s something about Beatrix Potter illustrations that transports me, almost immediately, to a sort of deluded and wondrous mood that I associate with being a kid. Something about the mice and hedgehogs, dressed up in their tiny bonnets and skirts. I recognize, now, how problematic it is to dress animals up in humanoid clothing. I don’t mean to condone this. But, as a child, I always had the sense that these costumed animals, with Victorian mannerisms, were teaching me something important about how to be alive in the world. I’m not sure I ever figured out what it was. But Potter somehow became a staple of my childhood literary diet. To this day, her creatures generate a kind of instant and cozy sense of nostalgia in me. There’s a Jemima Puddleduck mug in the cabinet of my Brooklyn kitchen that always seems an infinitely comforting vessel for coffee and tea. And this is all despite that fact that, as a number of critics have noted, there is also something a bit dark and unsettling at the heart of many Beatrix Potter tales.

The darkness of Potter’s stories makes sense, perhaps, in the context of the new perspectives on Potter that have been emerging over the past decade or so. Books like Linda Lear’s Beatrix Potter: A Life in Nature or exhibits like the one at the Victoria & Albert Museum (whose website has posted many of her unpublished illustrations and sketches), underscore the fact that Potter was an amateur naturalist before she was ever an author of children’s books. As a young woman she was trained, like many other girls in her social class, to paint flowers. But her interest in the natural world quickly extended beyond this. She began to sketch other plants, and small animals. She paid frequent visits to the Natural History Museum. Eventually, after undertaking a close study of the botany of fungi, she developed a deeper curiosity in the nature of lichen. She apparently went so far as to cultivate alga and fungal spores in her own kitchen, in an attempt to develop experimental proofs of the hypothesis she was developing. She believed there was a symbiotic connection between lichen and its host. This conviction developed into a paper that was presented, by her uncle, to the Linnean Society in her home region. Women were not allowed to attend meetings, let alone to present at them. So she was effectively shut out. And, in her absence, it appears that her findings and hypothesis were pooh-poohed.

This was due, in part, to gender dynamics in this amateur scientific culture. But it was also due, in part, to the fact that she had been deeply influenced by the theories of the Swiss botanist Simon Schwendener, who’d developed an early theory that lichen were produced through a symbiotic relation between fungus and alga. His theories had been rejected by other lichen botanists of his era. Apparently his theory flew in the face of claims that all organisms (such as lichen) had to be fully autonomous. Schwendener even went so far as to claim that there was an actual master-slave relational dynamic at work in the relation between fungus and alga (the fungus, he believed, was making a veritable slave of the alga). This seems, perhaps, a polemical claim almost designed to contest the autonomy of organisms. Many later botanists, who made use of his ideas, apparently distanced themselves from the master-slave claims at the heart of his theory. So far as I can tell, the master-slave relation doesn’t appear to feature prominently in Potter’s own theory. But I do wonder to what extent the social theory embedded in Schwendener’s work continued to influence the way that Potter herself conceived of the world around her.

Eventually, after being squeezed out of the amateur scientific community, Potter’s sketches and illustrations verged away from the realism of the naturalist and into the fantastic world of the children’s tale. But it seems to me, after re-reading The Tailor of Gloucester, that the theory of symbiosis never really disappeared from her intellectual work, and re-appears in interesting ways, even in this strange little tale.

For those who’ve never read it, or have long since forgotten the plot, it revolves around a very poor, bachelor tailor who owns a little shop on Westgate Street, in one of the oldest parts of Gloucester, but lives in the kitchen of an old building on College Court. He rooms with his cat, Simpkin, who is apparently astute enough to do the grocery shopping for the household, but cannot speak in complete sentences to the tailor himself. This tailor, we’re told, is living through the era “when gentlemen wore ruffles” and, when we meet him, he’s hard at work designing a cherry colored cloak (lined with yellow taffeta) for the mayor of Gloucester to wear to his wedding on Christmas Day. The cloak is almost finished, but lacks a bit of cherry colored trim. The tailor, exhausted from a day’s work, goes home and asks Simpkin to purchase the goods for him (along with a scrap of food), and hands over his last bit of change to the cat.

While Simpkin is out, the tailor discovers that Simpkin has trapped several mice below a series of teacups (ostensibly saving them for a midnight snack). The tailor frees the mice, and subsequently falls ill with a terrible fever. When Simpkin returns home, he discovers that his mice are gone, and he becomes irate. He hides away the trim he’s purchased for the tailor, and proceeds to sulk. Over the next few days, the tailor is unable to leave the house and finish his jacket—lost, as he is, in the throes of a fever. But when Simpkin goes out for a stroll on Christmas Eve, to work off the depression, he passes by the tailor’s shop and realizes that the mice have been finishing the tailor’s cloak on his behalf. They taunt him, from inside the building. Simpkin runs home, to find the tailor and to return the trim to him. The tailor—recovered from his short illness—hurries to the shop to find his project complete. But the mice are gone, leaving Simpkin, still, without his feast. The story ends happily, for the tailor. He’s able to present the cloak to the mayor. And this project, apparently, brings him many more. He ends his life as a fat, rich man—a sought-after tailor whose buttonholes were so triumphant, so small, so neatly crafted, “they looked as if they had been made by little mice!”

We are meant, it seems to me, to assume that the tailor is ultimately rewarded for freeing the mice. The tailor allows these liminal creatures to live, and they (in turn) serve him by helping to produce beautiful garments that bring in a lot of cash. Ultimately, there is a mutualistic benefit to the creatures in this relation. The mice depend on the tailor, to stay alive. The tailor, in turn, begins to depend on the mice for his economic vitality. In a more abstract sense, he also depends on them in order to stay alive. There is, then, a kind of symbiotic relation that’s set up between these two biotic communities. Perhaps we can extrapolate, from the dynamics of this relation, a kind of moral or ethical fortune cookie message: when we extend our kindness to other creatures, we can expect great benefits. Or, better: if we serve other creatures, they in turn will (willingly) serve us, bringing prosperity to all. The relation between the mice and the tailor is the optimistic and cheery model of a kind of mutalistic sense of servitude between humans and animals.

But what is to be made of poor, frustrated, Simpkin? It would appear, on the surface, that he too is involved in symbiotic relations with both the mice and the tailor. Without the mice, he is left without the pleasure of a nice snack. The mice fulfill a kind of desire, for him. When this desire is frustrated, he is thrown into a depression. He depends on the tailor, however, for shelter and companionship. But it is Simpkin’s troubled relations with both the tailor and the mice that provides the narrative tension in this tale. The mutually beneficial relation between the tailor and the mice only exists because the tailor frustrates Simpkin’s desires and foils his plans. The mice are only able to be useful to the tailor (finishing his unfinished cloak) because Simpkin has hid away the trim. Simpkin, the domestic creature, serves as a kind of negative foil. Perhaps we can imagine the symbiosis between Simpkin and the tailor, or Simpkin and the mice, as parasitic. Perhaps we are meant to see that Simpkin’s world is set up to reap benefits from his relations with the mice (or the tailor) that are not mutual. Thus, the relations that Simpkin models for us are inherently problematic. They are morally and ethically inferior to the mutualistic relations between mice and tailor.

There are, surely, other ways of reading this. But given Potter’s interest in symbiotic relations between species, I’m tempted to believe that we can witness a kind of theory unfolding, even here. I’m interested, additionally, in the sort of commentary Potter appears to be making about human relations with their domestic creatures. Potter, herself, didn’t appear to be opposed to the domestication of animals. There are pictures of her, as a young woman, leading a rabbit (the prototype, perhaps, for Peter Rabbit himself) around on a leash. But, perhaps, she was making a commentary on how our (symbiotic) relations with domestic animals threaten the livelihood of other forms of species life. She was, if the rotund Mrs. Tiggy-Winkle can stand in as any indication, a lover of hedgehogs. These creatures are now endangered, in the U.K., perhaps in part because they’ve become victim to capture by growing numbers of domestic cats on the prowl at night. I have to wonder whether Potter’s portrayal of liminal creatures—who live near us, but never truly with us—as domesticated in their own right (busy in their kitchens, caught up in all manner of domestic tasks) serves as some sort of challenge to our sensibility of what it means to be in relation with domesticated creatures in the first place–a way of raising questions about who serves who, in the messy web that weaves creatures together.

Should Animals Have Rights? »
« Temples of Meat & the Foodie’s Heretical Taste for the Forbidden